It goes without saying that missing a flight is notably among the top 5 things on my “things I hate about travelling” list. Especially when you have made the most effort to avoid such a situation (flashback to my trip to Cuba).

Just yesterday I had planned a day trip to Belfast for a day trip, but found myself at the Ryanair customer service desk pleading my case over a £100 for a new ticket. The fact that the original return ticket cost me only £15 I found it hilarious that the airline would charge 7 times more just for a one way ticket. (insert a tantrum)

Besides the outrageous charge, the lead up to arriving to Stansted airport involved unnecessary delays with public transport, followed by airport security. Though having scheduled enough journey time this did not stop me arriving at my appointed departure gate only to see a “gate closed” sign with no airline staff for assistance. Having flown many times this year with Ryanair I must admit this is the 1st time seeing a flight depart ahead of the scheduled time. *claps hands*

While waiting in line to speak to customer service I had rehearsed my pitch of sorrow as to why and how I got in this predicament which lead to me missing my flight with the hopes of being moved to the next flight free of charge. Naive! but a girl has got to dream.

My plea went down the drain, nor did I get the chance to act it out and I was given the option of £100 one way ticket or finding my way to Belfast through another airline. Rather than kicking off and being all in my feelings at the attendant, I was fully aware that 1. there was no way I was getting a free ticket on the next flight no matter how loud my tantrum was going to be (c’mon its Ryanair) 2. I was willing to cut my losses with £15 and return home rather than pay £100 for a one way flight.

Moral of the story!

Missing the flight was n̶o̶t̶ the lesson nor the amount of money wasted, the lesson was sometimes things don’t work out according to your plan and your attitude in that moment determines how you are going to receive the lesson. God has a way of testing our character and showing us how to react in moments when things do not go our way. Looking at things in this perspective will provide you with moments of growth. Having traveled plenty of times I am not ashamed to admit that this is the 4th time I have missed a flight but I can see the growth in my reaction and attitude towards the situation in comparison to the previous scenarios.

Would love to hear your thoughts on your experience of flights & tantrums! 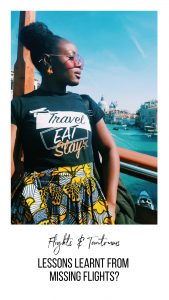 Prague: cheaper than a train ticket to…

Venice: Things I wish I knew before…